free shipping for orders above ₹5000 in India. shop our bestsellers Butterfly Monogram Mug- A To Z
₹550
add
Continue shopping
As entrepreneurs we are constantly bombarded, not just with managerial advice, surprise tax notices and retrospective bills, but also with exhortations by “thinkpreneurs” to delve into our spiritual side. Wake up at 5 am to meditate, practise 2 hours of yoga or heal our  “auntie-bodies” with anti-inflammatory, pure foods. If we don’t hold our spiritual souls in balance then obviously our materialistic egos will never be happy and we are subconsciously conspiring with the universe to fail, right?
Well - a study from October 2020 found that some popular forms of spiritual practices, like energy healing, yoga, and meditation, correlate with both narcissism and a sense of “spiritual superiority”. The authors of the study measured spiritual superiority as people who feel they are “better than” those who don’t have the spiritual wisdom they ascribe to themselves.

Hmm...you would think that, since spiritual training encourages people to detach from the ego and practice self-compassion and non-judgement - that narcissism would perhaps be less present?

Alas, nope.  The study found that spiritual training may enhance peoples’ need to be “more successful, more respected or more loved.”
Kaufman’s SciAm piece delves into this issue, citing from this and other studies:

“Just how much of a problem is all this, really? Perhaps on the whole, spiritual practices really do help quiet the ego, and spiritual narcissism isn’t that widespread. What do the empirical data actually have to say on one of the greatest paradoxes of our time, which is: If a major point of yoga is quieting the ego and reducing focus on self, why are there so many yoga pose pictures on Instagram?” Burn!

According to the study: “The “genuine” spiritual path is nothing more or less than becoming awake: directly in touch with reality as it is right here and now, including qualities we do not like.
The very starting point that something must be fixed or changed, that one needs to get away from here to a better situation, merely obscures contact with this reality. And yet, spiritual trainings often carry the hedonistic promise of improving our impact, creativity, confidence, focus, listening skills, stress resistance, eating habits, or happiness altogether. Trainees may have the goal to alleviate suffering, become inspiring leaders, keep their heads cool amidst their busy day‐to‐day dynamics, cope with loss, ruminate less, sleep better—all motives that are materialistic in Trungpa's book and stem from being displeased with present reality.”

Kaufman, a humanistic psychologist who wrote a book on the science of self-actualization, ends the piece with a better option to superiority: healthy transcendence. It’s not an easy task, but is the root of how spirituality can help without amplifying the ego. Healthy transcendence involves confronting reality as it truly is, head on, with equanimity and loving kindness.

Does this mean we might be stuck with certain inner disturbances forever? While this might not be what you signed up for, at least the treadmill of constantly seeking can finally be eased. The pressure's off. You get to unclench and relax.
As Oliver Burkeman says about never feeling quite there yet, (“there” being the spiritual enlightenment we were all promised by monks who sold their Ferraris and plastered their faces on billboards and books) “It turns out my really big problem was thinking I might one day get rid of all my problems, when the truth is that there's no escaping the mucky, malodorous compost-heap of this reality. Which is OK, actually. Compost is the stuff that helps things grow.”

And if you came here for the links, here’s the list for the week:
To Read: This may be of no surprise to you, but according to the Art of Happiness author and researcher, Arthur Brooks, the secret of a long-and fulfilling life happens to be falling in love and staying in love with your long-term romantic partner (we’re talking decades and decades of partnership) who you also happen to describe as your best friend. (One out of the both of us have lucked out on this one).
Also, read, “What would your teenaged self think of you?” “An old friend and colleague of mine and I were talking about how short the time gets in middle age — not just because it’s finite and you start calculating how much is left, but because you suddenly have all these obligations to family and career, and the hours and days evaporate. When you’re in your twenties and thirties it seems like you’re just goofing off until your real life starts, but once your real life does start, it turns out to take up all your goddamn time, and you yearn for the goofing off.” It’s true that youth is wasted on the young.
To Listen: A get-up and go playlist that is a series of affirmations woven into the songs. This one’s for those Fake-it-till-you-Make it days when you can do with a little self-confidence swagger. Speak it and Believe it! First song on the playlist, Wake up : “I wake up everyday feeling good, I wake up everyday feeling good, Everything is as it should be.”

To Learn: The heart emoji breakdown: A series of fun stats about which heart emoji is the most popular, what meanings have been attributed to the different coloured hearts, and what the heart emojis translate to on different devices. This is just a personal plea for more use of the heart emoji all around, even if it’s very ‘simpy’ and old millennial.  Also, just love “heart exclamation"❣️

To Cook: “Strata" is a combination of a frittata and bread pudding, and this dish has a twist of pizza too - what could go wrong? There's nothing revelatory about the flavours here — cheese, tomato, bread, egg, and any other mix-ins you want  (what's not to like?), but the thrill here is in the texture. Even though it is full of bread and cheese and egg, there is something oddly light and fluffy and soufflé like about this dish, especially if you follow her instructions and use properly stale bread. And unlike actual pizza, you can binge through this and not need to be resuscitated post that carb-coma.

To Explore: A new and free AI-powered tool doing the rounds is called ‘Deep Nostalgia’. It animates still photos that can then blink, smile or nod at you. It is pretty damn cool and pretty creepy at the same time. Try it out with any of your old relative’s photos.  Also check out this twitter thread of famous people from Indian history weekend, starting with a 24-year-old Bhagat Singh.

To Joy Scroll: William Dalrymple’s thread -  spotlights the majesty of the Laxmi Narayan Mandir (Orchha, Madhya Pradesh) which led to photographer Kevin Standage’s blog  and a treasure trove of photos of the temple and its paintings - the ceilings crammed with intricately beautiful caricatures, from Firangi mercenaries who once fought for the 18th century Bundelkhand Rajas, to mythological vignettes of Gods and Goddesses.

To Watch: A recommendation from Maria Popova -
“During a recent dark season of the spirit, a dear friend buoyed me with the most wonderful, hope-giving, rehumanizing story: Some years earlier, when a colleague of hers — another physicist — was going through such a season of his own, she gave him an amaryllis bulb in a small pot; the effect it had on him was unexpected and profound, as the effect of uncalculated kindnesses always is — profound and far-reaching, the way a pebble of kindness ripples out widening circles of radiance. As the light slowly returned to his life, he decided to teach a class on the physics of animation. And so it is that one of his students, Emily Johnstone, came to make Bloom — a touching animated short film, drawing from the small personal gesture a universal metaphor for how we survive our densest private darknesses, consonant with Neil Gaiman’s insistence that “sometimes it only takes a stranger, in a dark place… to make us warm in the coldest season.”

To end, for approaching Women’s day, we would like to share Alice Walker’s poem, one that she wrote for her mother who was a maid and wife of a sharecropper. Her mother (who sounds like all desi mothers) was fiercely determined that Alice and her siblings would receive an education and have access to all the opportunities in life that weren’t available to her - and modeled a woman of grit, strength, survival and hope.

They were women then
My mama’s generation
Husky of voice—stout of
Step
With fists as well as
Hands
How they battered down
Doors
And ironed
Starched white
Shirts
How they led
Armies
Headragged generals
Across mined
Fields
Booby-trapped
Ditches
To discover books
Desks
A place for us
How they knew what
we
Must know
Without knowing a page
Of it
Themselves.

Sending love and joy to all the women, women-adjacent and women-supporters out there. Wear your crown high : your pain may be big, but your courage be bigger. Take a deep breath, have a snack, and go out and crush it.
Viv & Ami
Share Share on Facebook Tweet Tweet on Twitter Pin it Pin on Pinterest
Back to The Delights of Distraction
The Delights of Distraction No.83: 5 lessons from our Moms we wish we learnt earlier
No. 83
It’s Mother’s day today. It’s the only time of the year in which we, at The Wishing Chair, hold a sale. We rarely ever go on sale otherwise; as we believe in offering the best prices we can throughout the...
8th May 2022
The Delights of Distraction No.82: Mothers in various forms and Eid Mubarak
No. 82
Welcome!  We are Viv and Ami. And this is our weekly collection of delights to read, watch or listen to. You’re one of thousands of subscribers across India that tune in every week to read our random musings. Thanks for...
6th May 2022

Come see what the fuss is all about

Let customers speak for us

Love it. Packaging was excellent

The dressing shadow box is very unique and beautiful . The quality is up to the mark. Love this piece of art. Thank you wishing chair😊 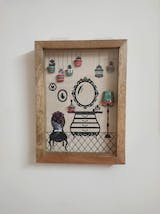 It is exactly as I expected it to be, the design is lovely and the material is really soft. Waiting for the proper occasion to use this smart bedvover.

I loved my new monogram cups . They were perfect and also good quality . I got what I was looking for .